Opened in July, The Japanese is the sixth restaurant at Annabel’s Club, joining old-school Italian, Matteo’s, with its extensive inventory of Sassicaia dating back to 1968 served in a space delightfully evocative of the original Club, The Mexican, home to the one of the best in the world. the largest mezcal and tequila collections, listed alphabetically, and the all-day garden, whose terrace features a retractable glass roof installed by the same engineers who covered Wimbledon’s Center Court. It was in the latter that the guests, serenaded by Kylie Minogue, exhausted the bottles of Domaine de la Romanée-Conti Grands-Echezeaux 2005 and Château d’Yquem 1988 during the first Golden Vines Awards last year. , raising £1.2 million to fund diversity and inclusion. following the associated wine education programs for the Gérard Basset Foundation.

The Japanese occupy what used to be the Elephant Bar on the first floor, whose fanciful bespoke wallpaper by de Gourna is, according to designer, Martin Brudnizki, inspired by the painting of Sultan Ibrahim Adil Shah II riding his precious elephant (Atash Khan of Farrukh). The combination of India on the wall and Japan on the plate can be said to be a bit jarring, although painting the lily in a club whose hallway features a rainbow unicorn hanging from a hot air balloon inspired by Jules Verne, and the bathroom, a crocodile basin formed from a 500 kg hand-carved green onyx slab is not unexpected. Blue banquettes are new, as are jewel-encrusted elephant napkin rings and gold chopstick holders on mirrored tables; the DJ station remains for diners who like to combine turntables with dining tables.

We sampled a fresh amberjack sashimi with jalapeño and a perky yuzu sauce that justified a request for more sauce (£23), an invigorating woven seaweed salad with apple (£16) and, best of all all, a particularly succulent black cod saikyo miso (£56). ) as well as a sweet soy garlic smoked filet mignon (£48) which proved to be the less stirring dish. As long as they’ve taken off their hats at the door and refrained from wearing dirty trainers or holey jeans, well-heeled members can also enjoy a grilled wagyu sirloin with fresh wasabi (£120). Also available is the selection of sushi and tuna sashimi, with ‘special sushi’ options including wagyu nigiri with ‘mountain peach’ and truffle (£32). Neighboring tables also opted for tempura, such as spicy asparagus and avocado at £17. Next time we visit, we’ll make room for the already well-written matcha éclair. 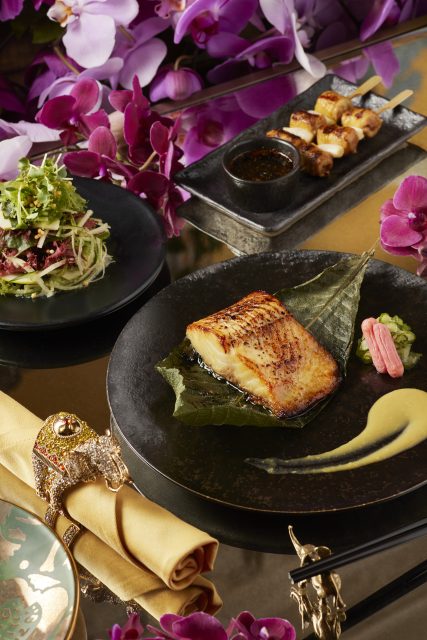 We were looked after by Chee Khui, the elegant and sharp head sommelier of fellow Birley Club, GEORGE, currently undergoing refurbishment. He is also, given his lips remained sealed when asked to provide details of the upcoming Bacchanalia restaurant in the former Porsche showroom at the edge of Berkeley Square by Annabel operator Richard Caring, discreet. Khui, who studied architecture at UCL, previously worked at Roka, Zuma and was the owner of HK House, Stroud. During today’s visit, he gave an overview of the sake library available to him at the Club. “You have to let go of the wine mentality,” he advised when approaching premium expressions. “Sake is the opposite of the wine world where money buys bigger flavors, while sake gets trickier – like catching snowflakes.”

100ml options by the glass include Masumi’s Mirror of Truth Junmai (£11), IWA 5 Assemblage 2 – Toyama (£37) by former Dom Pérignon cellar master Richard Geoffroy, while the option more sanctified by the bottle is Tatenokawa 1 – Zenith – Yamada Nishiki (£4,900), an infusion made from polished rice at a rate of just 1%.

“Modern sake is an advent of refrigeration and precision grinding,” noted Khui, who believes sake is a healthier beverage than wine, due to its “pure water.” Being protein-rich rather than fruit-based, sake is suitable for “protein hunters” like him who are “looking for molecules with its higher concentration of peptides”. Pairing sake with dishes, Khui observed that the Asian palate “does not shy away from dissonance, while the French is about harmony”.

The extensive selection of sparkling wines included Rare 2008 (£45) and Dom Pérignon – P2 2003 (£95) by the glass, maintained using Coravin sparkling technology, although no English sparklings feature in this format. Another 900 or so bottles of wine are taken from the main Club list, referenced on an iPad afflicted with a lovely little glitch, which means turning the pages manually (the screen shows curled pages) can require patience and skill. These include 1963 Charles Krug, Lafite Imperials, as well as collections from Romanée-Conti and Pétrus.

Also available are the Japanese whiskey collections, including Yamazaki 55 (costing £28,000 per double pour), of which only four bottles exist in Europe according to the Club, while the signature cocktail menu is inspired by the ‘Book of Five Rings by Miyamoto Musashi. – Fire, Water, Wind, Earth and, for non-alcoholic options, Void. An example of a Fire drink is Flames of Tokyo, featuring Suntory Toki, “shrub of flames” and nori leaf oils, topped with soda.

Believing that “a company’s greatest asset is its people”, Annabel’s wine manager Georgios Iordanidis, who was visiting Tokaj producer Oremus at the time of our visit before getting married, was born in Tbilisi and grew up in Athens. He previously worked at LPM, The Arts Club then Zuma, where he created a particularly logical and original list.

Although the early days for the Japanese and the visit to the August precipice when several London clubs including Annabel’s break service while their members depart for exotic climes, the dining room was full when we visited Friday noon. Clearly, the members longed for such a kind of cuisine, and drawing on the experience of starting The Ivy Asia, of which he is chairman, Richard Caring deftly honed his love for savory Japanese cuisine and often rare sakes in this famous glamorous and fun club. .